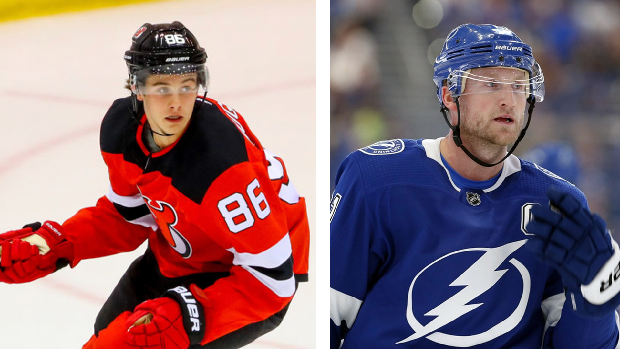 Through six games, Hughes finds himself with 0 points, a +/- -4 rating and zero wins to his name. Hockey fans have been critical of the 18-year-old but before tabbing him a bust after just SIX GAMES, we think it’d be beneficial for the haters to know that Hughes is far from the first top pick to struggle out of the gate. With that in mind, here are four others who found them self in the same boat.

Hughes’ own teammate even went through the same growing pain. After being selected with the first overall pick ahead of Tyler Seguin in 2010, Hall registered just a single point in his first seven games with the Edmonton Oilers. He went on to tally 22 goals and 20 assists in just 65 games. Jeff Skinner ultimately won the Calder Trophy with 31 and 32 in 82 games played.

Another All-Star, Stammer went his first seven without finding his name on the score sheet. He finished his rookie season with a modest 46 points in 79 games but dominated with 51 goals and 44 apples in his sophomore season. He remains one of the league’s top scorers today.

A bit of a blast from the past, Nolan, who was selected with the first pick in the 1990 draft, recorded just two points through his first 14 games. The following season he went on to score 42 goals and 73 points in 75 games. Plus… he managed to land himself on the cover of one of the best EA NHL games of all time.

Nash went on to score 437 goals in his career but things didn’t start out so hot for the 2002 first overall pick. The Brampton native found the scoresheet just twice before finishing the season with 39 points. The next season he posted a ridiculous 41 goals, the second highest of his career.

Don’t hit the panic button yet.

Well everyone, there you have it. Before you start harping on this kid, just remember that he’s got plenty of game left.