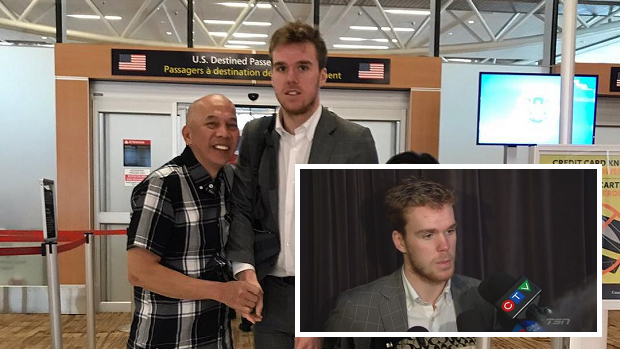 Tonight, the biggest game for the Edmonton Oilers in the past decade is about to happen and all anybody can talk about is the best player in the game’s awkward fan photo from yesterday.

Connor McDavid stopped to take a photo with a couple of fans in the Anaheim airport yesterday and they put him in a pretty uncomfortable position. They got in really close to him and even held his hand as the photo was taken. Coming off a long flight and getting really touchy feely is enough to make most people uncomfortable, but still McDavid happily took the photo.

Today, he was asked about the encounter himself and he told his side of the hilarious encounter.

Connor #McDavid doesn't seem thrilled to be taking this photo. . (Via: Twitter/Margeaux Maron)

That’s hilarious that it’s exactly how it looks. Sometimes photos can capture something that doesn’t tell the whole story, but this one seems to capture it pretty perfectly. It certainly looks like a “Death Grip”.

There was also another awkward photo that McDavid took with a fan that someone shared on Reddit, and it looks like they had a similar grip on him then too.

Connor McDavid in another awkward fan photo from hockey

He may take some awkward photos off the ice, but he looks like a natural on it. There’s not many people that can make the game look as easy as he can.

Also, PSA for all the McDavid fans out there, stop grabbing him so tight.