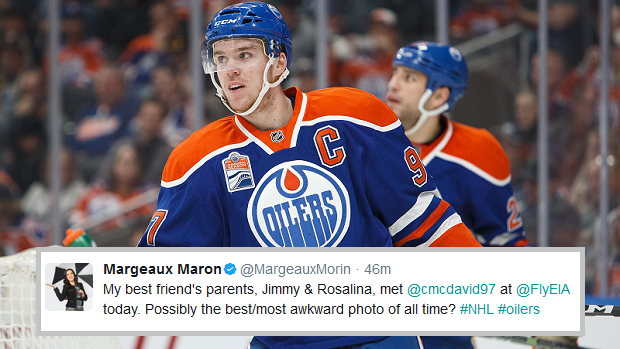 Connor McDavid is quite possibly the most exciting hockey player to ever walk this earth.

Considering the level at which hockey is played in today’s world, the speed at which he’s able to play the game is on another level. Of course, with his style of play he attracts a lot of fans and is no doubt asked to take photos with them every single day.

Combine that with playing by far the most he’s ever played in a hockey season and he’s got to be pretty tired. That’s bound to some awkward photos like this one.

Now, it’s definitely awkward, but we have to agree with Margeaux that it’s also the best. Not only for his priceless reaction and being oddly intertwined with the two fans, but taking photos with fans at any time is always an admirable trait, let alone when you’re just getting off a flight - a time when nobody is feeling their best.