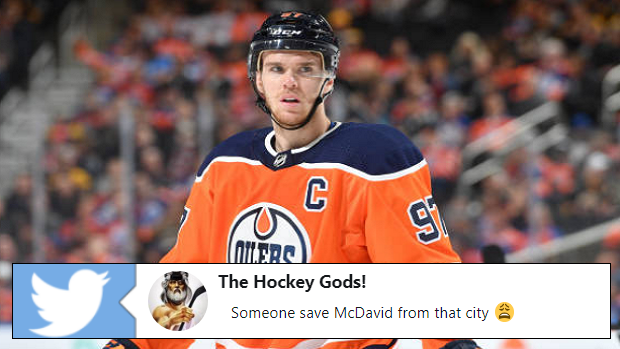 The Edmonton Oilers have found themselves in the middle of yet another rough season. After a successful 2016-17 campaign which saw the team win a playoff series, the Oilers are back at square one and sitting at the bottom of the Western Conference standings.

The one bright spot in the dismal season has been the play of captain Connor McDavid. The 21-year-old sits second in the NHL with 79 points and has eight in his last four games. Still, his play hasn’t been good enough for a few Edmonton residents, who took it upon themselves to chirp the superstar. Obviously there are fans in every city who are going to make everyone else look bad, but following a player into the parking lot to taunt him while he's spending time with his parents? Not a good look.

If you had trouble hearing, the heckler told McDavid, “You’ve gotta start winning games man,” and told him he “needs to get traded.”

Edmonton fans are probably rolling their eyes at this and McDavid probably did the same. McDavid spends a lot of his time volunteering and getting involved with the Edmonton community, so better than anyone he would know that this an anamoly. This past week he made trips around the city and spent time with residents at local arenas and fire halls.

We're sure many players have had worse said to them than this, including McDavid, but this is just a reminder that these players are the last people you need to be heckling about team success.

Tag a friend who would have the same reaction after meeting #ConnorMcDavid. . (📷: Ryan Jesperen/Twitter)

We're sure anyone can agree he won't be going anywhere any time soon.