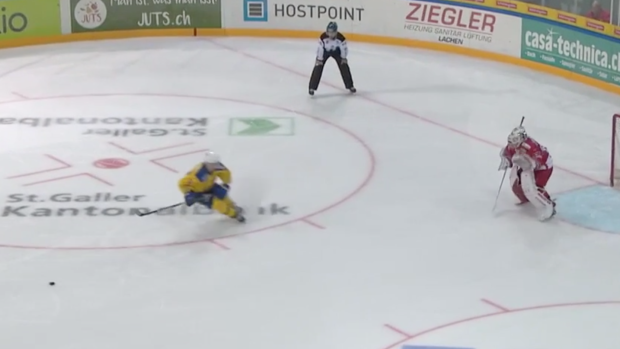 Are you ready to see one of the strangest shootout goals you'll ever see?

Even if you're not ready, buckle up because this one is all kinds of weird and it was scored by Enzo Corvi, a 25-year-old who plays for Davos HC in the Swiss-A league.

During a game against the SC Rapperswil-Jona Lakers, Corvi had a chance to win it for his team in the shootout.  As he was coming down for the shot, though, he lost the puck and what happened next was a surprise to everyone watching.

The shot wasn't blown dead and Corvi proceeded to dangle the goalie and silence the crowd with his glove after scoring the winner.

You might be asking yourself why Corvi was allowed to continue the shot after losing possession of the puck and the answer to that question is because the puck didn't move backwards after Corvi lost control of it, but instead moved laterally (or appeared to), he was able to continue the shootout attempt.

We told you it was one of the strangest shootout goals you'll see!