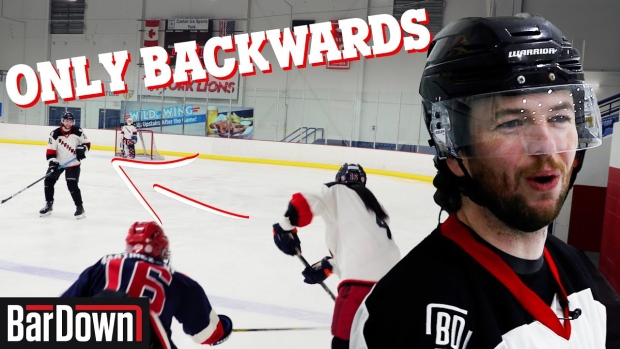 A couple weeks ago we saw Eric challenge Corwin to impersonate one of hockey's all-time greats; Sidney Crosby. With a number of tasks to complete, Corwin did his best to embody #87 in a beer league hockey game.

He nailed the warmups, complained to the ref a bunch, did some not-so-tight turns in the corner, refrained from talking to his mom and sister on game-day (sort of), and did the Golden Goal celebration.

In the end, it was determined that the turns in the corner were not tight enough, and Corwin was left one task short of the waterline. You know what that means?

In the latest Going BarDown vlog post, Corwin had to drink three litres of milk during a beer league hockey game - one litre per period. Anyone that has done the 'Milk Mile' before knows that this is no easy task.

It didn't take long for Corwin to start feeling lethargic from the lactose. After one litre he was already repeating the same phrase over and over again: "This is so bad."

As some of you may have hoped, and others may have not, he then proceeded to upchuck some snow-white vomit as he made his way through the third carton.

This, of course, was just the beginning of the video! The rest of the video featured the BarDown hockey team trying their best to compete while only passing the puck backwards. It was... unsuccessful.

In case you missed Corwin's impersonation of Crosby, here it is.

You be the judge; did the punishment fit the crime?