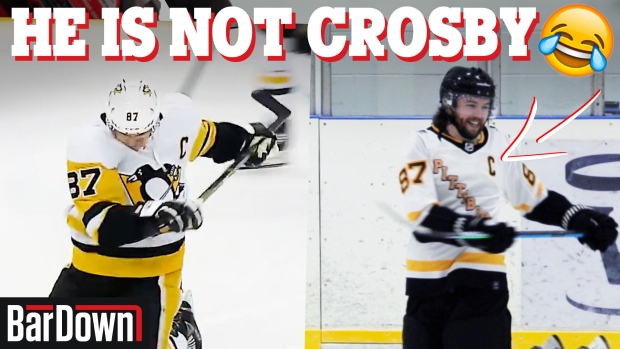 First off, for those that don’t know, BarDown’s official hockey team… is now the OFFICIAL champion of our beer league.

That’s pretty impressive, considering half the time the players are producing some sort of content, often at a disadvantage to their own team.

However, recently, Corwin and Eric decided to tape a piece of content that may actually help the team… imitating one of the greatest players of all time!

Corwin showed up to the rink where Eric was waiting with two Sidney Crosby jerseys. His idea was to challenge Corwin to do his best imitation of Sid the Kid, and had a list of Crosby-isms for Corwin to check off.

They are as follows…

To make the challenge a little more reasonable to complete, Eric only requested that Corwin complete five of the eight missions. Let’s see how he did…

Honestly, we heard him complain to the refs a number of times. Maybe that could have counted as a 5th task completed, but with the phone call to his mom funny business we’re sticking with the verdict: FAILURE.

Besides, this way we get to watch Corwin chug 3L of milk before playing hockey. Is anyone really arguing against that outcome?