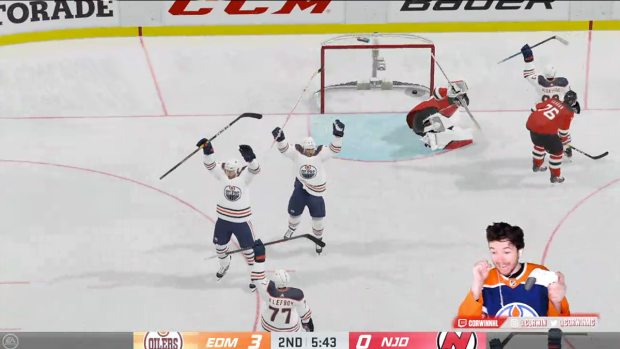 Our resident NHL 20 enthusiast Corwin is trying to take down The Great One in a virtual journey only a very certain kind of person would embark on. Live streaming on Twitch, Corwin is in control of Jeff Beukeboom Jr. in Be A Pro mode, and he’s on a quest to break Wayne Gretzky’s single season records in Goals (92), Assists (163), and Points (215).

After four games, Corwin has managed to record six points (3 goals, 3 assists). So, yeah… We could be here a while.

Early in the stream, Corwin’s spirits are high! We’ll see how that changes as the day, the night, and maybe even tomorrow transpire.

.@corwinmc is up to 3 goals and 3 assists through 4 games in his quest to break Gretzky's single-season records in ONE live stream. We're going to be here a while.

We’re all rooting for you JBJ! To check in on the stream, hit this link!