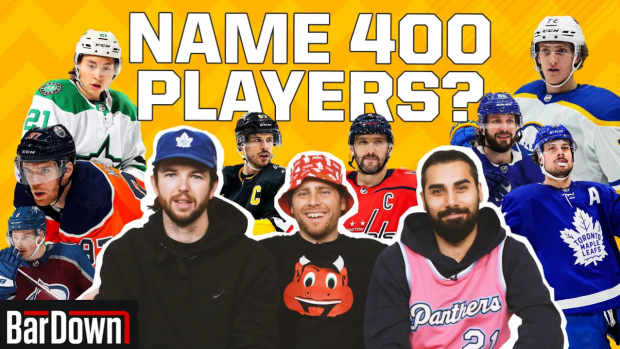 The BarDown quiz is BACK! Only this time… it’s a little different.

Instead of the usual format in which participants are faced with a 10-question list, with various bonus rounds and trap cards along the way, this concept was a little more… shall we say… simple.

Name as many NHL players as you can.

Of course there’s a bit more to it than that. You can’t repeat a player that’s already been said, the player must have played at least one game this year, and when DZ decides to throw in a “Super Selector,” the contestant must choose a player from that randomly selected team.

At least… random for some… You’ll see what we mean.

Alright, there you have it. Not going to lie, as a non-biased onlooker I think it’s fair to say Luca didn’t really get a fair shake. He did pretty well with the Arizona Coyotes roster, but we’re thinking DZ may have rigged the deck on the “random” draw.

On top of that, Corwin’s guess of Marcus Naslund was not going to fly.

Did you like this format for a quiz? Let us know in the YouTube comments, we read them all!