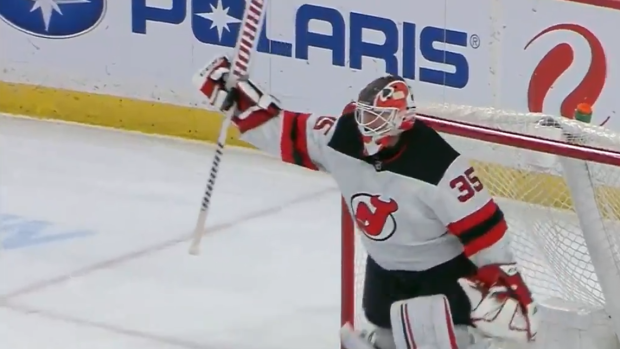 Owing to a mix of injuries and poor play, Cory Schneider has been mired in the slump of all slumps. The Devils goaltender has been winless since December 27th of 2017, going 0-17-4 over that span of games.

Until now. After Friday’s win over the Minnesota Wild, Schneider has his first win in a long time, and it came in a doozy. Not only did the Devils barely eke out a 5-4 win in overtime, but Schneider entered down 4-0 after Keith Kinkaid was pulled, and remained perfect against 15 shots to make the comeback possible.

Cory Schneider has snapped his winless streak of nearly 14 months 😬

Was Schneider happy? Oh, he was happy. For his performance, he earned the Devils’ red-hot player of the game helmet, and seriously, this guy would not take it off.

I truly wish #NJDevils Cory Schneider was smiling in this picture. I may have captured the one single second during his post-game where he didn’t have a smile on his face. But wow, this must feel so good for him. pic.twitter.com/ptwxUcSb8R

He said he thinks it matches well with his beard. 🤣

Everyone knows how a slump feels, and Schneider has been hampered by injuries such as an abdominal strain this season and a groin injury the season prior. Finally getting one back in the win column must feel fantastic.