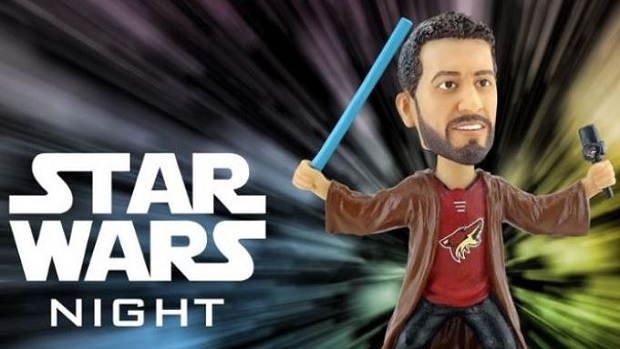 It doesn’t matter if you’re talking about BizNasty the former NHL player or Paul Bissonnette the Arizona Coyotes radio announcer/team ambassador, the man is a fan favourite throughout Arizona and the entire NHL.

Later this month, the Coyotes are giving Bissonnette his very own giveaway night when they host the Vegas Golden Knights on Saturday, November 25.

With it being the team’s annual Star Wars Night, the Coyotes will be giving the first 10,000 fans in attendance a Paul Bissonnette-themed Coyotes/Star Wars bobblehead known as Obiz-Wan Kenobi.

BizNasty’s Obiz-Wan Kenobi bobblehead will be holding a blue lightsaber in its right hand and a microphone in its left hand and it will be rocking Obi-Wan Kenobi’s robe.

Who wouldn't want a Paul Bissonnette Obiz-Wan Kenobi bobblehead? Join us on 11/25 for @StarWars night when we take on the @GoldenKnights!
https://t.co/dRnjvugaho

Bissonnette played six seasons in the NHL and spent five of them with the Phoenix Coyotes. In 202 career games, BizNasty scored seven goals and added 15 assists for 22 points to go along with 340 penalty minutes.