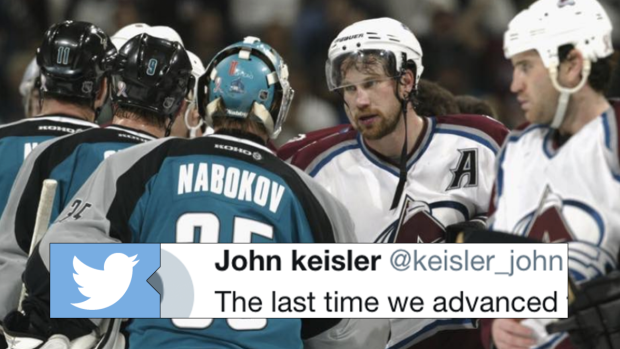 Wednesday night, the second round of the NHL playoffs will come to an end with the Avalanche and Sharks battling in Game 7 for a spot in the Western Conference Final.  The Avs and Sharks have been evenly matched through six games and Game 7 truly is a toss up, flip of the coin, insert metaphor for "we have no clue what's going to happen" here.

What we do know, though, is that Colorado fans might feel a little more confident knowing there's a pretty crazy coincidence that could play out once again if they were to beat the Sharks in San Jose to advance to face the Blues.

The last time the Avalanche made it to the Western Conference Final was the 2001/02 season and they did so by defeating the Sharks in 7 games.

Further to that, the series back in 2002 has gone exactly the same way as this series has gone.  Colorado won Game 6 and Game 7 almost 20 years ago and they'll have to do the same thing in order to move on.

The last time we advanced to the Western Conference Final was in 2002. Sharks led series 3-2, we won game 6 in OT... deja-vu then we defeated the San Jose Sharks in Game Seven. #goavsgo #BeatTheSharks @Avalanche pic.twitter.com/LpSzXbn85J

The only difference is that Game 7 back in 2002 was in Colorado.  The Avalanche have struggled in San Jose in recent years, so the task is even taller this time around.

The Colorado Avalanche force a Game 7 after edging the San Jose Sharks, 4-3, in overtime! pic.twitter.com/gaarGdMSht