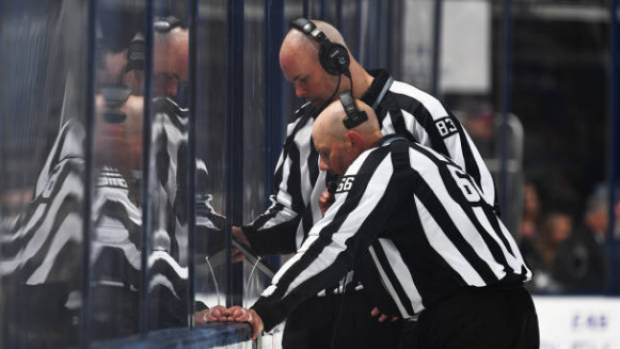 With the hockey season officially over for 19 teams as of Friday night, teams around the league have begun draining the ice in their respective rinks so the arena can be used as a venue for events like concerts and auto shows.

If you’ve never seen ice removed from an arena, well, cover your eyes, kids, because it’s quite a sad sight.

Another sign of Spring - ice being removed from Arena 1 by our Public Works crew! pic.twitter.com/klbTtukbFi

Some teams will let their fans and season ticket holders to come to the rink before the ice is removed for the summer and let their fans paint whatever messages or thoughts they have on the ice.
Whether it’s their name, draw a picture, or a shout out their favourite player, you can write just about anything as long as it isn’t offensive or derogatory.

But one fan decided to take it to another level and write a cheeky message that is relatable to fans of the NHL, and just about anyone that’s ever played the game of hockey.

The Blues were of course burned by an offside controversy that decided the final wild card spot in the West during the Avs and Blues final regular season game.

It makes you wonder when team’s do these sorts of exercises if there’s more creative messages written on the ice.

This one surely stands out.