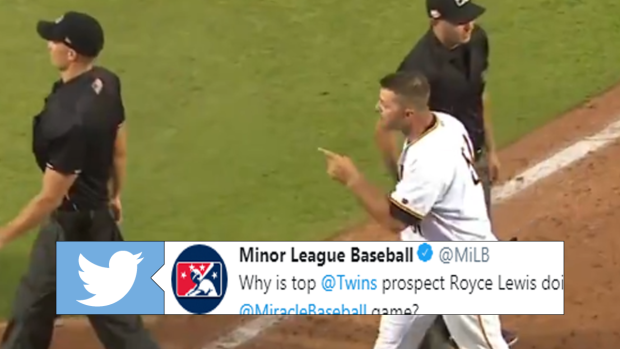 If you’re a fan of baseball, you are one of two types of fans.

You are either a traditionalist, that believes the game should unfold how it has for a long time, with respect and composure being valued qualities in the game. Or you are a new wave fan that believes in speeding the game up and adding personality and flair.

These two types of fans don’t agree on lots of things, but the most obvious is showboating via bat flips, watching your home run, or… push ups?

Royce Lewis is a prospect in the Minnesota Twins system, currently playing for Fort Myers Miracle. During a game against the Bradenton Marauders, Lewis had a new showboating tactic that caught some attention.

Why is top @Twins prospect Royce Lewis doing push-ups in the @MiracleBaseball game?

After the interesting double, it was clear the Marauders weren’t happy. Later in the game Lewis was up to bat again, and the pitch wasn’t anywhere near an area he could replicate the earlier double. In fact, the pitch went behind him.

the #mntwins royce lewis hits a double and does a few push-ups on second to show his team he needs to hit the weight room more and bradenton throws at him the next at-bat because....unwritten rules. pic.twitter.com/qFXATDjxhO

As has become the case whenever a player showboats, fans immediately got involved in the conversation. Some say Lewis deserved to be pitched at, other believe the ejections were warranted. Everyone seems to have an opinion on the matter.

How does Royce Lewis celebrate a LONG Double? Or punish himself for not knocking it out... Push Ups!? 🤣 pic.twitter.com/S2aYiK2G4H

can’t have fun in baseball

Dang... never thought I'd be #TeamUmp but here we are.

Key point...he wasn’t showing up the opponent. He was poking fun at himself. Bradenton was too sensitive. To me, this wasn’t even a case of “unwritten rules”. And I’m someone who is pretty old school and respects those. Good move by the ump to toss Wallace immediately.

Just wait until someone hits a home run and whips out a cell phone, recording themselves rounding the bases

I'd love to know what the manager was so worked up about. I certainly don't agree with throwing at people, but if you're gonna do it, don't act surprised when you get tossed.

Props to the ump for not engaging. Big league umps could learn a thing or two.

Either take option A : Throw at him & get tossed and cost your team or Option B : K him/get him out and then do two push ups yourself.

Love the ump not giving the manager much satisfaction and just walking away.

Man, if we can’t have fun in minor league baseball (where they have team names like Trash Pandas, Star Wars themed jerseys, and on field competitions for fan between innings) where can we have fun? #LetTheKidsPlay

That pitcher is incredibly soft. He was mocking himself and making his teammates laugh. No ill will or showboating, just having fun.

That ump showed incredible restraint. The older I get the less I understand how managers (Gardy) yelling at Umps is acceptable.