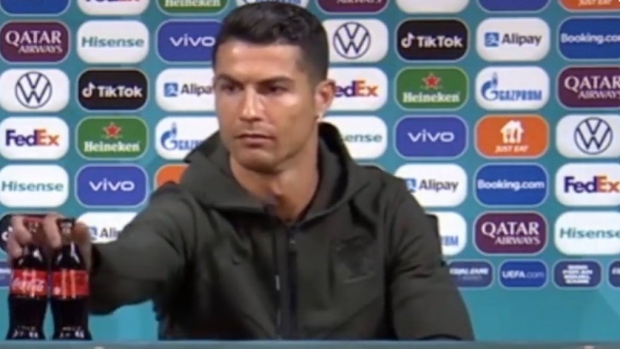 In the modern digital world we live in, everyone’s kind of an ‘influencer’.

People are constantly being influenced by what other people are posting, wearing, drinking, and promoting. So if someone with a few thousand Instagram followers has some pull when it comes to influencing how people buy, then imagine how much influence one of the most popular soccer players in the world has.

It’s no secret that Cristiano Ronaldo  treats his body like a temple, and rarely indulges in sugary drinks or unhealthy foods. I mean, you guys have seen him, right?

Definitely doesn’t look like a guy who unwinds with pizza, chips, and pop.

Ronaldo had a viral moment in a press conference on Monday, when he pushed two bottles of Coca-Cola away and encouraged viewers to drink water.

Water only for Cristiano Ronaldo ⛔

It was the tiniest of gestures, but it had a pretty crazy effect.

The Coca-Cola stock took a $4 billion dive after soccer star Cristiano Ronaldo pushed Coke bottles away from him during a press conference. https://t.co/AIr3rbXZfH