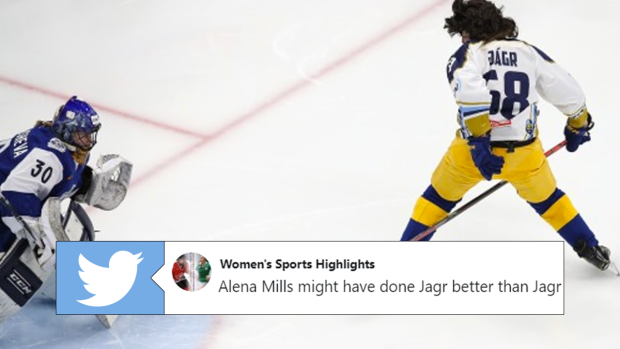 No, you aren’t the only one that loves and adores longtime NHLer Jaromir Jagr. We all do.

Jagr has endeared himself across the world as his never-ending hockey career continues. While he’s no longer wowing North American’s with his agelessness in the NHL, the 47-year-old continues to play at a high level in the Czech Republic.

It’s safe to say he’s a hero in those parts, and one Czech hockey player decided to pay homage by way of a creative shootout attempt.

Alena Mills of the ZhHL pulled out all the stops on this one, from the wig to the dipsy-doodles… you could have fooled us!

Say what you want about the all-star game, but it’s moments like these that make them fun.

Seeing lots of Jagr chatter on my timeline since he’s played literally forever.

Here’s my favourite Jagr moment 94-95 he played ONE game in a German league, one goal and TEN assists.