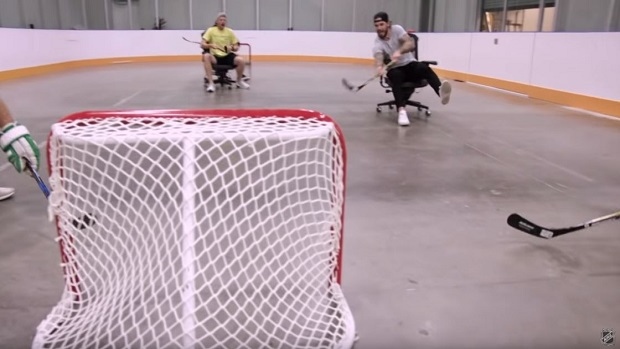 Dude Perfect is a team of trick shot masters wo have hit their fair share of unbelievable shots since they started creating content nearly 10 years ago. With more than 35 million followers on their YouTube page, the group has teamed up with some celebrity talents over the years including Drew Brees, Serena Williams and Ninja, to name a few.

Recently, the guys got a visit from Dallas Stars Jamie Benn, Tyler Seguin and John Klingberg and the three members of the Stars went head-to-head against members from Dude Perfect in five different competitions. In the best-of-five series, the two sides went toe-to-toe in Armchair Hockey, Longest Drive, Three-Point Shootout, Penalty Kicks, and the Two-Story Chip Shot, and the trick shot masters held their own against the professional athletes.

As expected, the professional hockey players ended up taking the Armchair Hockey competition but it was probably a little too close for their liking. After that the Dude Perfect guys bounced back in a big way by taking the next two competitions in the Longest Drive and Three-Point Shootout, but the Stars trio made sure to go home on top by taking the Penalty Kicks and Two-Story Chip Shot competitions.

Thanks for having us @dudeperfect Stars VS DP 🏒 ⛳️ ⚽️

The Dude Perfect team has paid BarDown in a visit in the past and we made sure to put their trick shot abilities to the test by having them compete in the TSN Office Challenge.