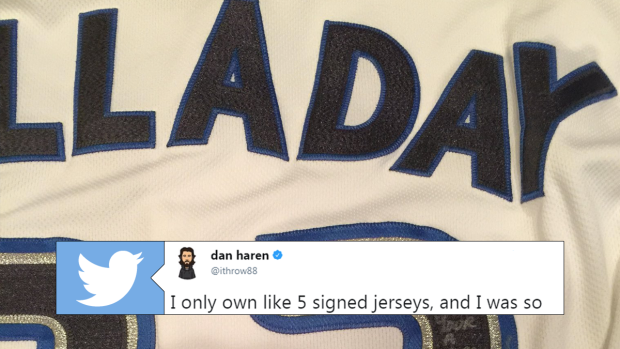 One of the many ways to know what an incredible person Roy Halladay was is by the way his peers looked up to him.

Halladay was known for his work ethic and his caring nature around the game. Above, you can watch several stories about how his personality shone through despite being one of the most successful pitchers of all time. Another story comes from a pitcher that looked up to him even as he was pitching at the same level as him.

Dan Haren asked him to sign his jersey and while he walked up a ball of nerves, Halladay was the one who said he enjoyed watching Haren pitch.

I only own like 5 signed jerseys, and I was so scared to ask him. He wrote that he liked watching ME pitch. What an honor pic.twitter.com/ufj4G8u5DD

While we hear the entire sports world mourn the loss of Halladay, it becomes obvious that he had interactions like this with everyone he met.

Even a simple tweet like this from Daniel Norris, a former Blue Jay prospect can tell you a lot. Halladay and Norris only had about a year of crossover in their careers, but he was still reaching out to players like this to give them advice.

Some of you have no idea what Roy Halladay meant to the careers of so many of the up & coming stars. Phone calls. Group talks etc. RIP Doc