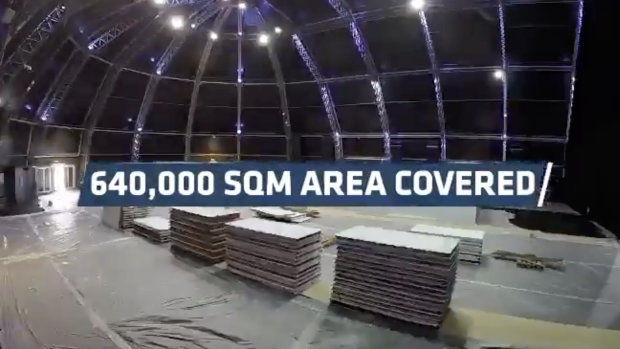 When UFC President said bouts were going to be held on something he called 'Fight Island,' he sparked our interest immediately.  Think about it, the best fighters on the planet on one island, what's not to love.

That mirage or vision Dana had is coming to fruition in just over a week as 4 events will be held on Fight Island in Abu Dhabi, starting with UFC 251 Saturday, July 11th.

We're really not sure what to expect as far as the venue goes and the layout of the island, but on Tuesday Dana White teased us with a first look at the incredible infrastructure and testing facility being built on Fight Island.

This is the first look at the testing and infrastructure being built on Fight Island (Yas Island, Abu Dhabi). This experience is going to so BADASS for my fighters and my staff!!! #InAbuDhabi @VisitAbuDhabi pic.twitter.com/dog3eIhxxC

That venue looks unbelievable and it still has a long way to go before being ready for next Saturday, so we can't wait to see the finished product.  Dana also gave us a taste of one of the octagons being prepared outdoors for the fighters.

Fight Island is by far the most creative any sport has gotten with returning to action amidst the global pandemic and we hope, above all else, that everyone involved stays safe over the coming weeks.