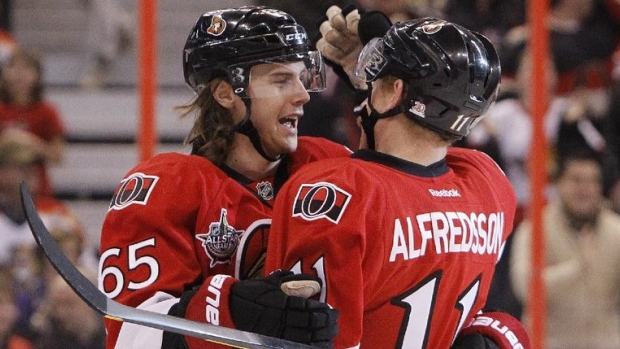 If there’s anyone that knows the difficulty with parting ways with the only team they've ever played for, particularly the Ottawa Senators, it’s Daniel Alfredsson.

“Alfie” spoke to reporters on Tuesday at a local golf tournament in Gatineau, Que., and knows all too familiar with the uncertainty around Erik Karlsson future in the Nation’s Capital. With Karlsson in attendance, two of the best players in Senators franchise history were together in the same vicinity, and the former Sens captain admitted that he’s spoken to the current captain about it all.

"We haven't talked a whole lot, but obviously we talk most days, it’s a difficult situation for everybody," Alfredsson said.

The franchise's leading scorer, who also left the organization as an executive, wants to see his fellow Swede return to Ottawa, but is well aware of all the rumours.

Alfredsson on Karlsson “I think it’s a difficult situation for everybody. No question he is a generational talent and the best player to ever wear the Senators jersey. Then we’ll see what happens. I know for me personally I hope he stays.”

"I know for me personally, I hope he stays," Alfredsson said of his fellow Swede. "Both as a friend and being able to watch him on the ice, especially going into his prime."

Would there be a big element of surprise if Karlsson is traded in the near future?

Q: Would you be surprised if he left? Alfredsson “To be honest I don’t know what to think at this moment. You know, what could happen? I heard at the deadline it was close. I heard after that it was close. I’m sure he’ll call me if something happens.”

The Sens claim they offered Karlsson a contract extension on Sunday night. On Monday, Larry Brooks of the New York Post reported that the team had given permission for teams to speak to Karlsson’s agent about negotiating a deal in the event of the Senators traded him. Karlsson understandably did not speak with reporters.

Alfredsson himself failed to come to an agreement with the Sens falling the 2012-13 season. The Gothenburg, Sweden, product opted to sign with the Red Wings the following season at the age of 41. After nagging back issues, Alfredsson signed a one-day contract back so he could retire as a Senator.

Fast forward four years down the road and Sens fans are once again dealing with the idea of their team captain and the most important asset to the franchise. Despite all the off-season turmoil, Alfredsson remains optimistic that the team can turn things around going forward.

"I have no doubt they're going to come back and be a consistent playoff team again," he said. "I think the way the fans are in this city, they're going to get behind the team and help out so I see that happening again for sure."

Erik Karlsson was spotted in Gatineau this afternoon with Daniel Alfredsson. Alfie was participating in the Alexander of Tunis golf event. (pics via @Syl_St_Laurent & @lisawallace29) #Sens pic.twitter.com/w3SIKJ1ra3