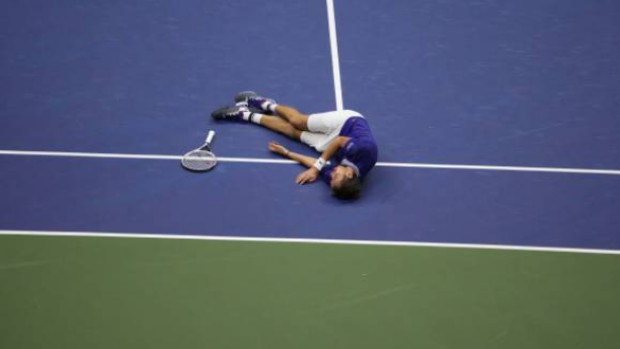 Daniil Medvodev , (Photo by TIMOTHY A. CLARY/AFP via Getty Images)

Winning a Grand Slam title is something that every tennis player grows up dreaming of. Coming out on top of the most grueling tournaments in the sport, to the standing ovation of the largest crowds in the game… that’s what dreams are made of.

…Would you play dead, like a fish on a dock?

Daniil Medvedev finally picked up his first Grand Slam title when he defeated Novak Djokovic in straight sets at the U.S. Open, and he celebrated in a very unique way. Immediately after Djokovic’s return hit the mesh, officially solidifying Medvedev’s status as a Grand Slam title winner, he dropped to the court and laid there motionless for a few seconds.

The Championship point, with a very unique celebration. 😂 #USOpen

After the game, Medvedev was giving his Championship speech when he explained what he did at the end. Well, he didn’t so much explain as he did give a clue.

Also known as a brick fall in FIFA. 😂

All of a sudden, FIFA players all over the world lit Twitter on fire. L2 + Left is the PlayStation code to make players “dead fish” on FIFA.

As he confirmed in his #USOpen speech, Medvedev's celebration was "L2 + Left," a.k.a. the code for the FIFA brick fall goal celebration.pic.twitter.com/A5ttYOY2jx

Ahahahaah, Medvedev with a FIFA refference in the end.

"I like to play FIFA. I like to play PlayStation. It's called the dead fish celebration...I talked to the guys in the locker room, they're young guys, super chill guys. They play FIFA. They were like, 'That's legendary!'