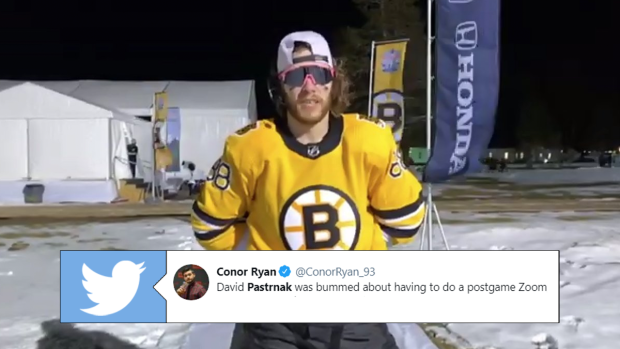 David Pastrnak was the star of Lake Tahoe on Sunday when his hat-trick performance helped secure a 7-3 victory over the Philadelphia Flyers.

His performance on the ice was obviously spectacular, but what we may remember of him the most is his now-iconic pink sunglasses. With the Bruins players showing up in 1990’s ski get-ups, Pastrnak brought the vibe right out to the warmups with him. After the game, and after the sun had set, the glasses returned.

That’s when we got this truly legendary moment.

David Pastrnak was mad because he had to leave the locker room while the song "Barbie Girl" was playing so he could do his post game interview with the media.@NBC10 #Bruins @pastrnak96
(Via @nhl) pic.twitter.com/5m8WO1WISv

Alright, listen, Pasta… if you want to dance to Barbie Girl, you’re going to have to stop scoring so many goals. We had no choice but to hear from you after the game, although now that you mention it, we would much rather have just filmed you dancing and singing to the 1997 hit Aqua hit song.

Pasta has been scoring at a ridiculous pace since coming back from injury, with 9 goals and 14 points in just 9 games. It’s safe to say the Bruins will be singing and dancing a lot more with a guy like that on the team.