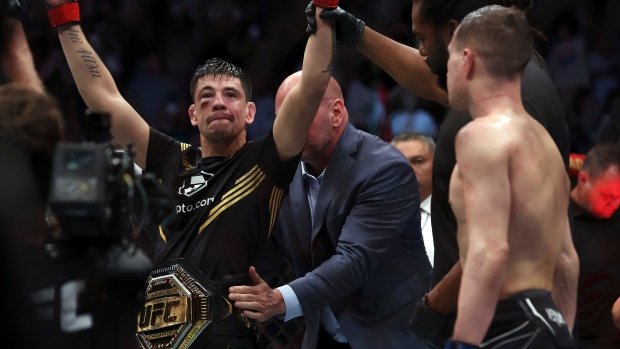 The first-ever quadrilogy fight in UFC history will take place early next year in South America.

Figueiredo, who hails from Brazil, posted about the matchup Monday night on Instagram. Both bout agreements have been signed, sources said.

This will be the fourth meeting between the top two 125-pound fighters in the world. Figueiredo and Moreno battled to a draw at UFC 256 in December 2020. Then in the rematch, Moreno became the first Mexican-born fighter to win a UFC title, defeating Figueiredo via third-round submission at UFC 263 in June 2021. Figueiredo got revenge at UFC 270 last January, beating Moreno in a close unanimous decision to regain the title.

It's not yet known whether Figueiredo vs. Moreno will be the main event of UFC 283. The UFC is weighing several other headlining options for its return to Brazil, a key country for the promotion.

This will be the UFC's first trip back to Brazil since March 2020, and the first time fans will be in attendance for a Brazil UFC event since November 2019.

ESPN has Figueiredo, 34, tied for ninth on its MMA pound-for-pound list. At flyweight, Figueiredo and Moreno are ranked Nos. 1 and 2, respectively.

Figueiredo (21-2-1) has just one loss in his past eight fights, coming against Moreno. The "God of War" owns a 10-2-1 UFC record and has not fought since taking the title back from Moreno earlier this year. Figueiredo is tied for the most finishes in division history with Demetrious Johnson (7).

Moreno (20-6-2) has only one loss in his past nine fights, coming against Figueiredo. The "Assassin Baby" won the interim flyweight belt by beating Kai Kara-France at UFC 277 in July via third-round TKO. Moreno, 28, is a former LFA flyweight champion.