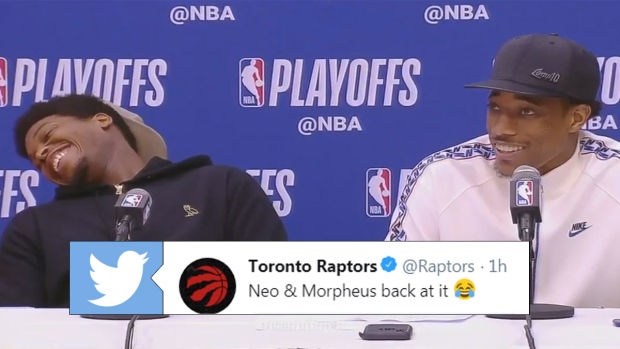 It was starting to look like the Toronto Raptors and the Washington Wizards were going to head back to Toronto for a Game 7 based on the way the first three quarters went, but the Raps went on to outscore the Wiz 29-14 in the fourth quarter to steal the win and a spot in the second round.

Following the game, the Raptors’ backcourt duo met with the media before heading back home and you can bet they were up to their usual hilarious games during their press conference.

Neo & Morpheus back at it 😂 pic.twitter.com/7LtKlQJMQL

DeMar DeRozan tried to blame Kyle Lowry for not speaking up and answering the question, but the Raptors point guard made a point to let his teammate know the question wasn’t directed at him so he left it for DeRozan to answer. By the end of it all both guys had a large smile on their face that draped from ear to ear and the duo was unable to hold back their laughter.

As for the Raptors, they’ll take on the winner of the Cleveland Cavaliers and Indiana Pacers series.

The #Raptors are moving on!! #WeTheNorth