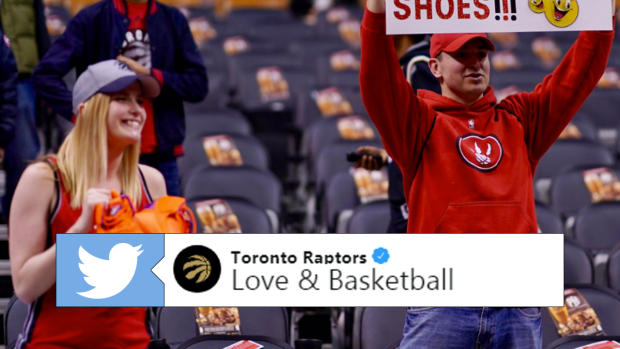 Sometimes it must be tough to be such a recognizable figure that you literally can’t walk through the streets of your city without people approaching you for autographs. On the flip side, it must be fairly gratifying other times when you can literally watch fans faces light up when they realize they’re about to own your signature.

DeMar DeRozan can relate. With the Raptors having yet another fantastic season, and DeRozan being right at the centre of it all, he has etched himself into Toronto with a serious celebrity status. As a result, he has that star power most people can only dream of. On Friday, a couple of engaged Raptors fans received a pretty cool wedding present from the All-Star guard.

Can’t walk down the aisle in much cooler shoes than a pair signed by your favourite NBA player. It seems like signs asking for pieces of equipment or signatures are really starting to take over. Countless young NHL fans have received sticks from their favourite players by taking the sign route, this one young Pens’ fan was actually ready to make a trade.

Next thing you know fans wanting to get noticed are going to be renting out billboa... wait...

Here is the #MelnykOut billboard that's located at Carling and Preston in all it's mighty glory. The power of the people. pic.twitter.com/2OEUxoQcBT

DeRozan better keep those fingers loose, his fanbase is growing by the second.