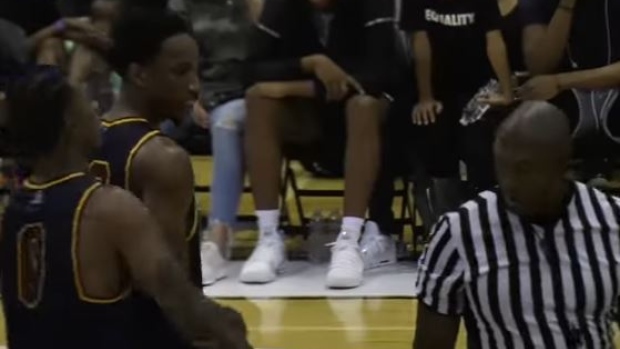 After a prolific season for the Toronto Raptors, DeMar DeRozan is spending his summer playing in the Drew League, a Pro-Am basketball league established in 1973. Just because it’s not the NBA, that doesn’t mean the Compton native is taking it lightly.

Recently, DeRozan schooled the number-one ranked high school player in the country with some ridiculous moves.

Today was a different story though, as the Raptors star lost his cool on the court. Towards the end of the game, DeRozan appeared to yell directly at the referee. Right before, he threw a pass that didn’t look to be catchable in the direction of the ref, and it ultimately bounced off the wall and hit him in the back.

Here’s another look from under the net.

DeRozan managed to knock down 41 points, however his team ultimately lost 104-99. He and teammate Nick Young furiously left the court together without even shaking their opponents’ hands.

At the end of the day, no one is perfect and everyone can fall victim to letting their emotions get the best of them. For the sake of Raptors fans, let’s just hope that we don’t see DeMar chucking passes like that during the 2017-2018 NBA season.