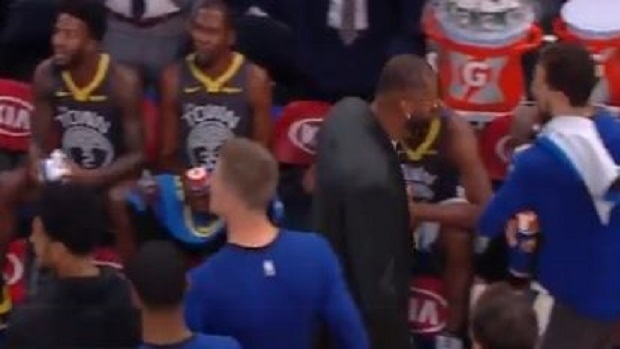 It takes skill to be an NBA player.

Not to mention being a four-time All-Star, Olympic gold medalist, and World Cup champion.

But is takes SERIOUS skill to get tossed out of a game that you’re not even dressed for.

Yeah, DeMarcus Cousins is that guy.

Demarcus Cousins has been ejected from tonight’s game for arguing with the referee. Btw, he is still inactive recovering from injury. pic.twitter.com/T7F2kQzjrh

Cousins, looking sharp in a suit and flashy gold glasses, was seen exiting the court at Madison Square Gardens after getting into a heated argument with referee Scott Foster, and being assessed a technical foul. It’s important to remember that Cousins has yet to play a game for the Warriors, as he’s been sidelined with a torn Achilles since he signed with Golden State.

So, for the time being, this is his only stat as a Warrior.

DeMarcus Cousins is a legend. Came to MSG. Isn't playing. Wore a suit. Got upset. Got a tech. Got ejected. Now 15 away from a suspension.

How DeMarcus Cousins leaving MSG after getting ejected pic.twitter.com/wJkM6Ru8C6

Not generally how you want to start things off, but, on the bright side, everything Cousins does from here on out can be seen as improvement.