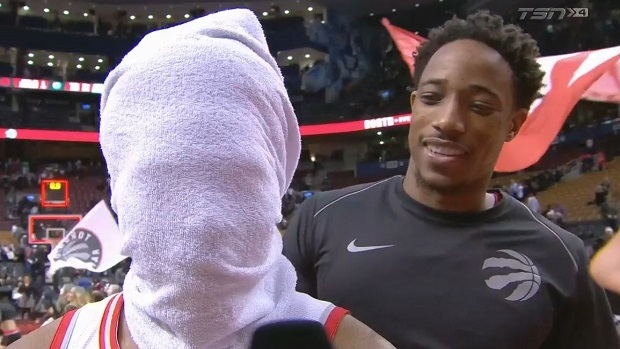 The Toronto Raptors picked up a massive victory at home over the Boston Celtics on Wednesday night to help them pad their lead in the Eastern Conference standings to three games.

While the Raps’ Bench Mob stepped up with another big performance, the team’s two All-Stars in DeMar DeRozan and Kyle Lowry carried their own weight throughout the night and combined for 29 points, seven assists and eight assists in the victory. While they stepped up when the team needed them the most during the game, one of their highlights of the night came during the post-game interview with Kate Beirness.

Another post-game interview, another video-bomb to highlight the bromance between @kyle_lowry7 and @demar_derozan. . #Raps #Raptors #WeTheNorth

Before Lowry got a chance to answer Beirness’ question DeRozan surprised him mid-interview by draping a towel over his point guard’s face. Rather than take it off and follow through with the interview, Lowry decided to rock the new look his teammate gave him and rolled with it until the end.