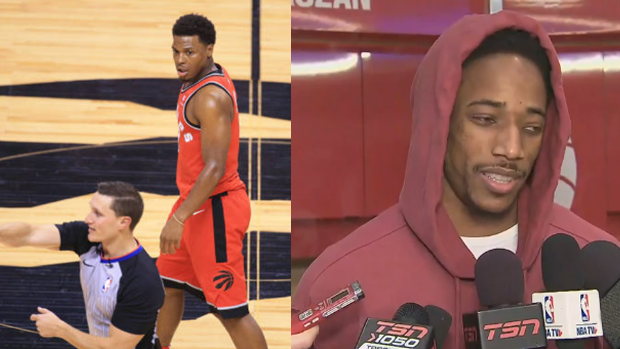 DeMar DeRozan isn’t afraid to speak his mind about the game of basketball, so it was no wonder that reporters went to him for reaction about Lowry’s ejection.

Most people are in agreement that the referee was a little quick to eject Lowry yesterday. Raptors Head Coach Dwane Casey even backed his players saying that the referee was encouraging the argument by continuing to confront Lowry. DeRozan had a little less to say, because he wasn’t sure how to give his thoughts without getting fined – which kind of speaks for itself.

What did you think of Lowry ejection?
DeRozan: (blank stare)
Question re-asked
DD-"Trying to figure out how to answer without getting fined"

Lowry was ejected for arguing a foul call with the referee, who quickly gave him two techinical fouls. If you watch the highlights above, you can see DeRozan’s full reaction to the question. It is very Marshawn Lynch-esque.

Either way, based on Lowry’s exit from the game, he seemed to get over it pretty quickly. He’s seen plenty of refs with quick whistles, so there’s no sweat off his back.

Kyle #Lowry giving kisses after getting ejected from the game 😗👶