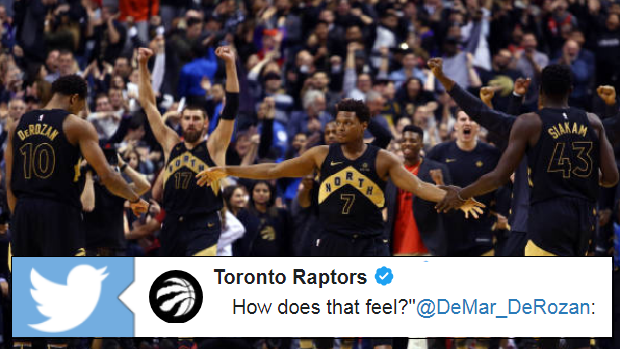 Canada’s lone team has enjoyed most of the season atop of the Eastern Conference standings and made a huge statement win over the Houston Rockets last night after they snapped their 17-game winning streak with a 108-105 victory.

Before the magic went down, Basketball Hall of Famer and current TNT personality Charles Barkley made an interesting claim when he expressed his belief the Raptors would win the East and make it to the NBA Finals. He then went on to say, “I’m on the Dwane Casey, DeMar DeRozan bandwagon.”

"The Toronto Raptors are going to win the Eastern Conference."

When asked about the comments the following day, DeRozan provided a short and sweet response about the 55-year-old.

Reporter: "Charles Barkley picked the Raptors to win the Eastern Conference. How does that feel?"@DeMar_DeRozan: "I love Chuck."

Reporter: "The rest of the @NBAonTNT panel was skeptical..."@DeMar_DeRozan: "I love Charles Barkley." pic.twitter.com/c3VoOuHWQ2

The comments clearly lit some sort of spark in DeRozan and his teammates, as he went on to post a 23-2-7 statline while teammate Kyle Lowry led the team with 30, 6 and 3 of his own. Everyone in attendance, including Raptors ambassador Drake, were ecstatic about the victory.

The Raptors have entered postseasons before with impressive records, but have yet to reach an NBA Final in franchise history. With the East seemingly wide open, this could be the year the Raptors finally face a Western conference team in the playoffs and make Charles Barkley look like a genius in the process.