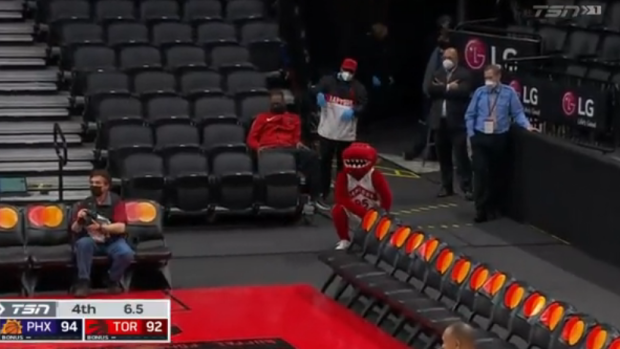 The Toronto Raptors have once again been dealt a significant blow to their home court advantage. While it’s not quite playing in Tampa Bay, Ontario has prohibited fans from attending Raptors games at Scotiabank Arena. No matter how much fake fan noise you pump into the building, it’s still an empty building.

Luckily, the Raptors have one fan that’s still allowed to attend games. In fact, it may be their biggest fan of all… the Raptor!

The Raptors mascot is known to be one of the best in the league. During Tuesday evening’s game against the Phoenix Suns, the Raptor proved why when he successfully got into the head of Suns star Devin Booker.

Booker appeared to be upset about something the Raptor was doing off screen, as he threw his hands up as though mimicking a gesture that annoyed him. The refs subsequently sent the Raptor off to kneel out of Booker’s line of sight.

It didn’t take long for Raps fans to jump on Twitter and offer their thoughts on the situation.

You for real Booker? C’mon https://t.co/F2butw0Wha

Raptor has the legal right to be there https://t.co/tyRb8nrflV

2022 is already a trip everybody! https://t.co/UczLEYJBpQ

This is pathetic from Devin Booker and the officials. Leave the @the_raptor alone. There is no need to move the mascot away in an empty arena. https://t.co/IqDswuWg0n

I am still laughing about the raptor being the only fan in the building and getting sent away https://t.co/i4WgZJaSz0