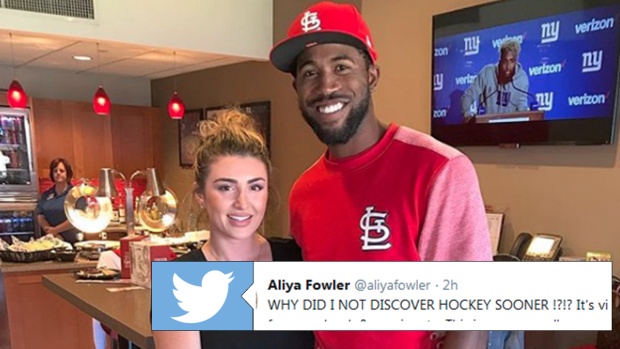 The Dexter household seems to be quite busy on social media these days.

Sunday night St. Louis Cardinals outfielder Dexter Fowler managed to break a mini-hitting slump by tweeting his way out of it, and on Monday, his wife Aliya discovered how awesome the game of hockey is and expressed her enthusiasm for the game online.

WHY DID I NOT DISCOVER HOCKEY SOONER !?!? It’s violent and passionate, the fans are drunk & passionate. This is so up my alley

The night started off with Aliya tweeting an adorable photo of their daughter, Naya, sporting a custom Fowler Blues jersey with her dad's number on the back of it.

Once they got to the game Aliya and Naya were given a special gift from the Blues' mascot, Louie.

All in all, you would have to say that the Fowler family's first trip to a live hockey game was a pretty successful one. In fact, it was so successful that they definitely learned to keep it cool when players come crashing into the boards.

Me & Naya look mortified every time someone hits the glass.... no one next to us flinches lol act cool Aliya, act cool