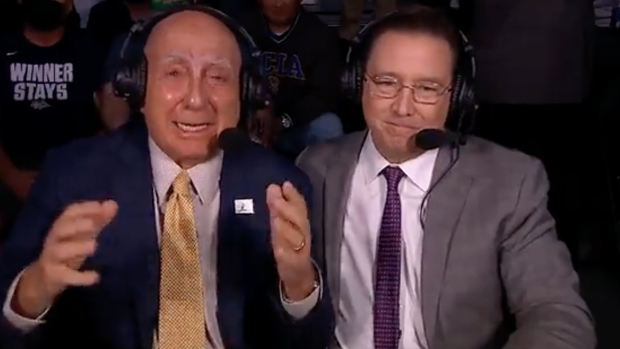 For the first time since being diagnosed with lymphoma, Dick Vitale made a broadcast appearance courtside for Gonzaga (No.1) and UCLA (No.2) on ESPN.

Tuesday evening’s match-up was very emotional as Vitale and Dave O’Brien highlighted just how much it meant for the ESPN vet to not only be in Vegas for the game, but to be sitting courtside again with his headset on.

The legend of @DickieV lives on ❤️

Vitale is currently undergoing chemotherapy treatment for lymphoma, which he was diagnosed with this past October, just a few months after beating melanoma.

So excited sitting with Dave O’Brien @ courtside / join us / can’t believe I am here after Doctors told me I had cancer on Oct 12. pic.twitter.com/WQqlLvQaAm

My Sports Chatter / heading to Vegas for GONZAGA vs UCLA / my 1st game at courtside since March 10 2020 when Zags won the @WCChoops title . CAN’T WAIT! @ESPNPR @jksports @ZagMBB @UCLAMBB pic.twitter.com/lICXHbStg5

Just making final prep for game @espn 10 EST # 1 GONZAGA - #2 UCLA - to be honest on Oct 12 when given the cancer diagnosis I never thought that I would be at courtside tonight / ur 🙏🙏🙏❤️❤️❤️ have helped so so much . To ALL of u in any battle “Don’t ever believe in can’t”! pic.twitter.com/ty1rszeAp1

There is no one we are happier for right now than Dick Vitale. Keep on fighting, legend!