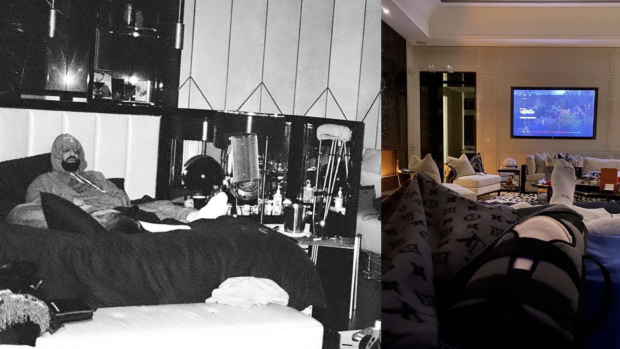 Steph Curry has been in the spotlight recently after the announcement of his Curry Brand release in partnership with Under Armour on Monday. Complex interviewed the Golden State star and they asked all the pressing questions, one that included a rumor with Drake.

According to the rumor swirling around, Drake may have torn his ACL while trying to guard Curry in a pick-up game in Toronto back in September.

Steph Curry enjoying the offseason & having a shootout with Drake pic.twitter.com/mI5sQsSCn9

Early in November Drake posted on Instagram of in bed injured. You can see the crushes, the walker, and a post-surgery leg brace but didn't specify how it happened.

BREAKING: Drake will miss the remainder of the 2020 season as he undergoes knee surgery. Teammate OVO 40 says he’s in ‘good spirits’ and looks to start the 2021 season strong. Certified Lover Boy is expected to drop at the beginning of the season, as per Woj. pic.twitter.com/YwPFUhpGuj

When asked on Monday, Curry laughed and hinted that Drake might provide the answer to that question in a song in his new album.

Did Steph Curry tear Drake's ACL when he was in Toronto? 💀

"Maybe it might show up in the new album coming out..."

Can we put to bed any speculation that Drake tore his ACL trying to guard you in Toronto?
[Laughs] Maybe it might show up in the new album coming out. We'll see if he drops a lyric or a line or something on what actually happened.

If you want the answer, you'll have to go buy his newest album to find out.

Twitter is now convinced that that's how it went down.