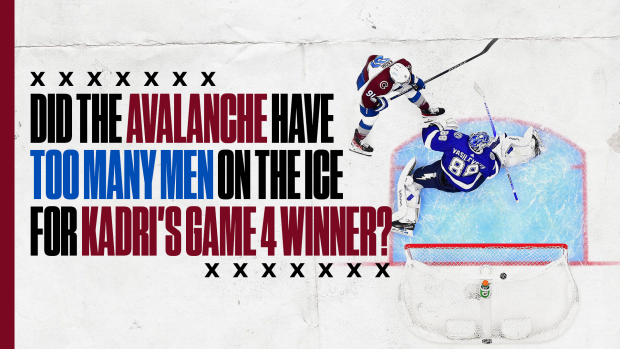 What are your thoughts on the play?

The Colorado Avalanche inched their way closer to hoisting the Stanley Cup with a huge Game 4 overtime win on Wednesday, and it didn’t come without any drama.

Nazem Kadri worked his way to a brilliant 12:02 into the extra frame, but upon further review… Colorado had too many men on the ice. Kadri appeared to take off Nathan MacKinnon on a line change a little too early, and was well on his way to the net with the puck while MacKinnon was still on the ice. The NHL even acknowledged the play was offside but reminded fans that the play was not reviewable. The referees ultimately had the final say and agreed that there were not too many men on the ice.

The craziest part is… the Lightning had even more players on the ice!

Wow. Lots to take in there. If you’re wondering why we mentioned Jon, it has to do with his post-game comments.

Tons of emotion, but is there really much else to say for this one? When it comes down to it, this is an issue that the league will need to discuss over the offseason. Referees are human and bound to make mistakes… why should some plays be reviewable and others unreviewable? We don’t want to slow the pace down too much but having reviews for too many men penalties seems logical.

What are your thoughts? Do you think the NHL should make too many men penalties reviewable?