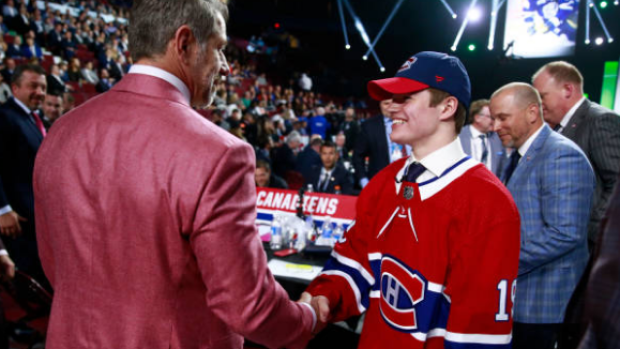 Although it's only been two months since the NHL Draft, Montreal Canadiens fans are so far pleased with their 2019 1st round pick, Cole Caufield.

Nicknamed "Goal Caufield" for a good reason, the 18-year-old looks to be following in the footsteps of undersized American sniper Alex DeBrincat, who, at only 5-foot-7, has scored 69 goals (nice) in 184 career NHL games already.

Cole Caufield is the only player in the #NHLDraft that averaged over a goal per inch of height in his draft-eligible season. 😝 pic.twitter.com/ShFMsxnKuv

Last week, the Habs released a behind-the-scenes video highlighting the NHL Draft -- it's a must-watch for really any hockey fan, as it gives consumers an idea of what it likes on the draft floor watching players on their rankings get crossed out pick-by-pick.

One astute Redditor pointed out that, in the video, you can see a piece of paper that appears to show the Habs internal draft rankings.

By the looks of it, the list appears to be the following.

When the Habs stepped up to the draft podium, they elected to go Caufield over Peyton Krebs, likely because of the Achilles injury he suffered training just weeks before the draft.

While we'll never know with certainty that the Habs were going to stick to this list, or if it even is their rankings, or perhaps who they thought would be gone, they did have some fun with the leaked list, releasing a video of their own on Tuesday.

Now we watch who will have a better career: Krebs or Caufield.