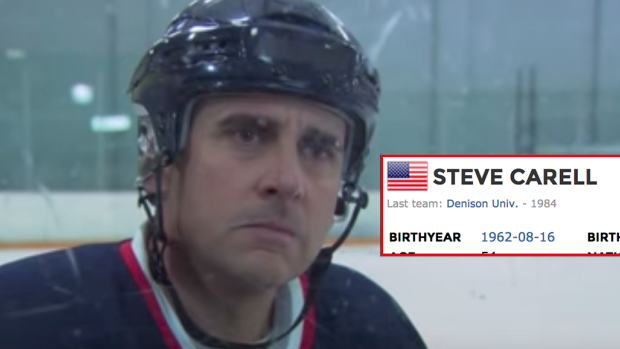 Most hockey fans know that Steve Carell is a huge hockey fan, but for those that didn't know that, we've got you covered.

Carell played hockey growing up.  He was a goalie and he actually had aspirations of playing professional hockey, as he explained to ESPN in an interview in 2013:

"I was a goalie. At a certain point, you either have to commit to that as a potential career or let it become a fun hobby. That happened in high school. I had to think about whether I was going to a Division I college hockey program and fight for a job of a goaltender or do something else. Instead, I went to a Division III school (Denison University in Ohio) and played throughout college. It was for fun and not advancing myself."

In that same interview, Carell said he still played hockey in a league in Los Angeles with his brother.

He also revealed he was a big Bruins fan in their run in 1970s actually inspired him to start playing hockey.

Now, here's something you probably don't know about Carell and hockey, the 54-year-old actually has his own page on eliteprsopects.com.

Denison University was the Division III school Carell mentioned in his chat with ESPN, but unfortunately his Elite Prospects page doesn't have any stats from his time at Denison.

Still, the fact that he has an Elite Prospects page is incredible.

It's also incredible Carell has had the opportunity to incorporate hockey into his acting career, most notably in 'The Office.'

Safe to say if there's one celebrity we'd want as a goalie on our hockey team, it would probably be Carell