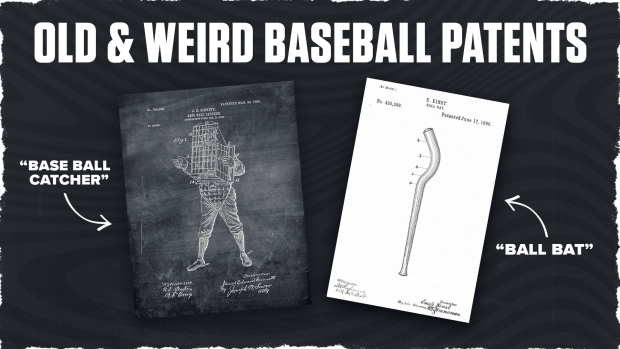 It’s no kidding that baseball’s long history dating back to the mid 19th century is full of deep-rooted tradition. Its culture goes far beyond sport and plays a pivotal role in the shaping of the United States.

And of course, there have been various innovative measures taken to advance the quality of play.

We’ve highlighted a few inventions that took the sport by storm, but oh boy does baseball have some pretty hilarious patents from its earlier days.

So let’s dive in!

Speaking of diving in, we thought it’d be best to start off with a pretty clever base idea. As it’s a pretty difficult task for umpires to watch both a runner's feet and a player's glove, John C. O’Neill developed a concept that would remove any grey area umpires may come across when making judgement calls.

We’re sure this idea quite literally set off bells in his head, as O’Neill thought to put a bell inside of a base to help signify if a runner’s foot had touched the bag, giving the ump the relief of having to only watch if the ball got to the player making the play in time.

We’re a bit on the fence about this one as we do think it’s a pretty unique idea that serves a great purpose, but we also are already cringing at the thought of hearing a bell go off non-stop during gameplay.

This next invention carries the same sentiment as the Base-Ball Base, but much more complex. So complex we’re still trying to wrap our heads around what is going on here. This idea created by John Humphreys is giving us some major Dance Dance Revolution vibes.

Within his complex idea, Humphreys wanted to incorporate electrical circuits into the infield to help send currents to highlight whenever a fielder would make a play. If there’s one thing about baseball, it’s that its simplicity is what makes it so awesome. By adding wire circuits and plates for players to stand on to send said signals, the reason why people love baseball seems to get fogged out. We don’t need a signal to know that this innovation definitely misses the mark.

The sole thought of this invention actually being implemented has us laughing our heads off.

When thinking of a catcher, the amount of protective gear they wear is a part of the job. But boy, did catcher in the early days of baseball have it rough. Think of it as the Happy Gilmore batting cage approach.

So when James Bennett tried to incorporate a human cage for catchers to wear, we’re honestly not shocked this idea got given three strikes.

The cage would sit on the catcher's chest and would essentially catch the pitch for them before an opening would drop the ball down into the catcher's hands before they’d toss it back to the catcher.

This idea is just giving us strange Victorian Era doll vibes and we’d probably be beyond creeped out if we saw someone wearing this contraption.

This patent here is almost too good to be true and comes from a much more recent era of the game, almost a true testament of 90s culture.

Richard C. Soegel coined the idea of a baseball cap that would allow people to interchange various team logos to be placed on the cap.

This honestly may be the best patent on this list because we could totally see this being the rage in the 90s. Let’s say you’re a huge fan of the Bronx Bombers 1996 World Series era, you know, Jeets, Mo, you know the gang. But Barry Bonds is in his absolute element joining the 40-40 club so you want to rep the Giants. Well, look no further and say goodbye to having to buy multiple ball caps when you could just give your hat the ol’ switch-a-roo and give it a makeover in seconds!

Even better, imagine pulling an Ichiro Suzuki and being traded to the team you were set to go up against in a series. You could just rip off that Mariners logo and swap it for the classic Yankees one!

If you’re a hockey fan, then you of course know the classic Curtis Curve goalie sticks. Well, say hello to Curtis’ much older brother created by Emile Kinst. We’re not exactly sure of how you can transform a baseball bat in a way that doesn’t seem illegal like a corked-up bat, but this bat definitely would not be approved in ANY games.

If you thought hitting a 90mph pitch with a normal bat was hard, get ready to have a giant bend in your bat to make it even harder!

Kinst’s idea of having a gigantic curve is to serve the purpose of giving balls that were hit a better spin.

Yeah we’re not buying it, now if you marketed this idea as a giant pirate hook, then maybe we’d reconsider but as a baseball bat, yer outta here!

So there ya have it! Here are some of the craziest baseball patents that never truly were brought to fruition and honestly we’re kind of happy about that.

Having to pause a game due to some sort of malfunction with a giant horror movie cage is probably not ideal to go along with your peanuts and crackerjacks.