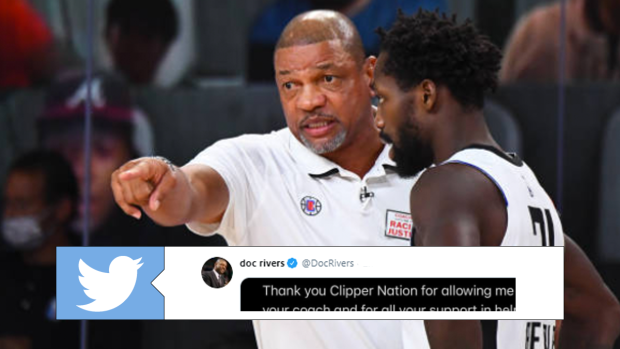 The Los Angeles Clippers came into the NBA season with stars in their eyes as arriving superstars Kawhi Leonard and Paul George breathed fresh air into the franchise. Fast forward almost a full calendar year, and the Clips are in disarray.

Team chemistry seemed to be a problem all year, and when the NBA restart happened the issues became even more apparent. The Clips ended up blowing a 3-1 series lead vs. the Denver Nuggets to bow out in the 2nd round of the Playoffs. On top of that, all kinds of reports came out regarding the team’s lack of comradery, even to the point of “rolling their eyes” as Paul George gave his post-elimination speech.

As is often the case, it’s the coach that gets cut first. Although the Clippers season was undoubtedly disappointing, the parting ways of Doc Rivers from the Clippers shocked many across the basketball world. Following the news, Rivers reached out to fans of the team to thank them for all their support.

While the replies filled up with a spectrum of reaction, lots of it was unwavering support for the former bench boss.

Legitimately, you changed our franchise. If you weren’t hired, we wouldn’t be where we our. You pissed off a lot of fans this year but we won’t forget what you’ve done for us. #ThankYouDoc