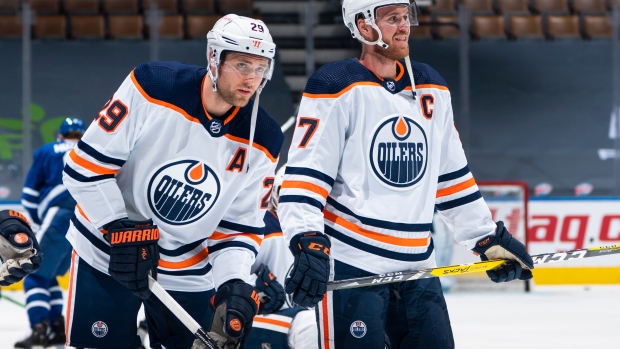 In news that should surprise literally no one, Connor McDavid and Leon Draisaitl​ are absolutely on another level right now.

Though we know it's much too early in the season to assume that the pace at which they're producing right now is sustainable, this duo's stats right now are pretty insane, and the Oilers' game against Ottawa definitely helped out those numbers.

The Oilers beat the Sens 8-5 last night, and the McDavid/Draisaitl duo combined for 11 points in that game alone. McDavid notched a goal and four assists, while Draisaitl nearly had a historic night when he came just one one shy of the NHL record of 7 for most assists in a game. The record was set by the Red Wings' Billy Taylor in 1947 and was matched, but never beat, by Wayne Gretzky three times when he was an Oiler.

The two sit atop the NHL points race right now, with 22 points for McDavid and 21 for Draisaitl. To put into context how much that is just 11 games into their season, Mitch Marner and Nathan MacKinnon are tied for the next spot on the list with 14 points.

While it's hard to compare teams so early in the season, especially with some clubs having played way fewer games, the Anaheim Ducks have a similar 10 games under their belt this season with a 3-5-2 record.

You know what they don't have, though? As many points on their entire roster combined as Draisaitl and McDavid.

The entire Ducks roster combined currently has 41 points, with Getzlaf's 5 assists leading their team, while Draisaitl and McDavid have a total 43.

If you needed a stat to prove just how dominant this duo is, there you go.
​