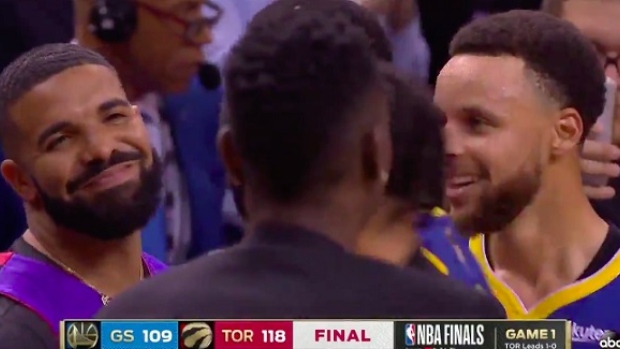 What’s a bit of trash talk between friends, right? After the Raptors took Game 1 against the Warriors on Thursday, cameras caught a heated exchange between Drake and Draymond Green.

Later on, Drake continued to war with Draymond over social media, but these two are known to be friends and it seems like it was all in good fun.

NBC Sports Bay Area’s Logan Murdock reported that thoe two, joined by Warriors teammate (and former Raptors 905er!) Alfonzo McKinnie and an “extended party” met for dinner in Toronto on Friday night. Draymond also adds that the reaction to their trash-talking in Game 1 was largely overblown.

It was there [Cactus Club Cafe in Toronto] that Warriors forward Draymond Green, teammate Alfonzo McKinnie and an extended party stepped into a private room adjacent to that rooftop deck Friday night with a special guest: Rapper and Raptors superfan Drake ...

There’s no doubt that Drake’s loyalties lie with the Raptors first and foremost, but he’s pretty well-connected around the NBA and that’s hardly a surprise considering his level of fame.

When it comes to being at the games, you know Drake will talk as much trash as anybody else, but it seems like things aren’t personal, which is probably for the best. He’s just getting his jokes off!

Anyone looking to buy some Steph #Curry hair lint? #Drake’s got you covered 😂🤣