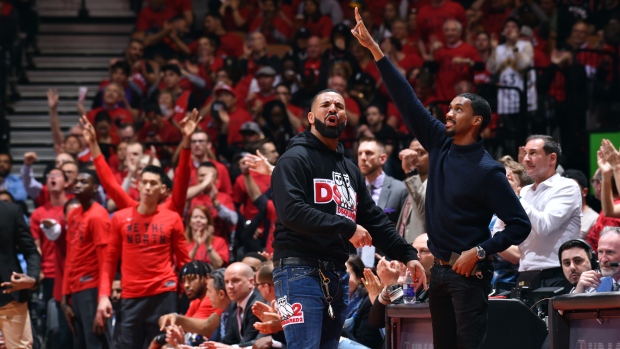 The Raptors caught a second wind upon returning to Toronto for Games 3 and 4 against the Bucks, winning both games to make it a best-of-three now as the series returns to Milwaukee.

Even with the team out of town, Drake is going to make his support felt. Like so many other Toronto citizens, he’s going to be out there at Jurassic Park tonight — and perhaps teasing some new music as well?

"Meet me in Jurassic Park at 8:30 whole city should be out like the sun...history is upon us," writes Drake.

That’s just the energy right now, with the Raptors within range of their first ever Finals berth. You can’t help but get excited, and Drake’s feeling it as much as any other Raps fan is. It’s a fun time.

As the Raptors get close and closer to their goal, Drake’s presence has been felt throughout the series — literally for Nick Nurse, when Drake ran up on him late in Game 4 with a shoulder rub. Believe it or not, the hands-on approach actually caught some flak, including from Bucks coach Mike Budenholzer.