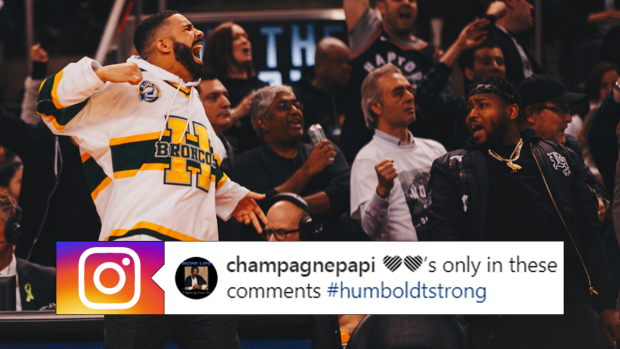 The Humboldt Broncos bus crash tragedy is just over a week old, but the devastating feeling still lingers. The crash that has taken 16 lives of players or people affiliated with the team has rocked the country, breaking hearts from coast to coast. With all the devastation seeming to really hit home for the hockey-loving country of Canada, the support towards friends and family of the lost lives has been huge.

This includes Canadian celebrities, sports teams, and almost everyone in between. The latest to show his support in Canadian superstar musician Drake, who wore a Humboldt Broncos jersey to Game 1 of the Raptors-Wizards series – a game that the Raptors won 111-106.

Saturday night, Drake posted a photo with special tribute to the fallen Broncos.

💛💚’s only in these comments #humboldtstrong

The photo was taken by photographer Kishan Mistry, who managed to snap a few nice shots of the Canadian star during Saturday’s win.

When @Vinylz and @tminusmusic send a beat pack through...

.@Drake showed his support for the @HumboldtBroncos by rocking a Broncos jersey to Game 1 against the Wizards. pic.twitter.com/iTqBtNGla3