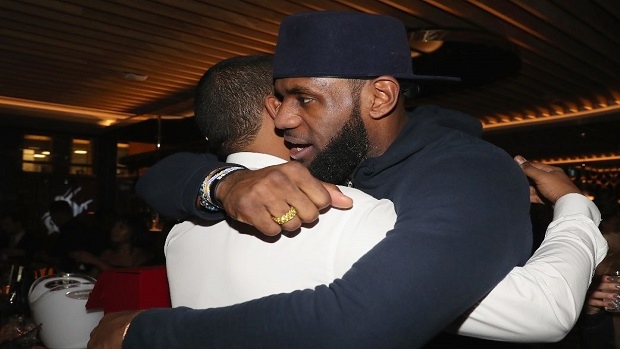 Drake tends to face a lot of criticism online for the way he supports more than one team in different leagues, but you can’t blame him considering he’s good friends with a lot of the players on these teams.

From rapping about hosting a Golden State Warriors practice in his backyard to showing LeBron James around Toronto during the Caribana festival, Drake knows just about anyone and everyone.

That’s not Fred Van Vleet...that’s me

While Drake is friends with a lot of professional athletes and celebrities, one person he really get along with and someone he always shows some love for is LeBron James.

Since the two have become such good friends over the years, Drake decided to hook up LeBron James with access to his new Toronto Pick 6ix Restaurant to host a birthday bash for three-time NBA champion Dwyane Wade.

The Cleveland Cavaliers played in Minnesota on Monday night and since they’re off until Thursday night when they pay a visit to the Toronto Raptors, James took advantage of the team’s off-time in Toronto by hosting an early birthday party for one of his very good friends.

Aside from Drake and members of the Cavaliers taking in the private birthday party, the guest list also included OVO Chubbs, DJ Charlie B, DJ Meel, Baka Not Nice, Eric Da Jeweler, DJ Steph Floss, Future The Prince, and many others.

The Pick 6ix Restaurant will officially open on January 10th and is located at 33 Yonge Street.