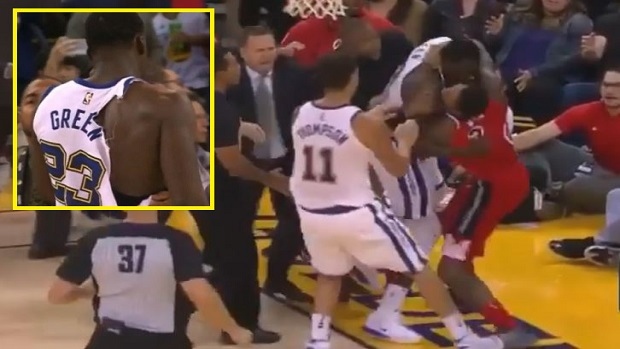 The Washington Wizards and the Golden State Warriors only play each other twice a year, but they really don’t like each other.

The Wizards paid a visit to Oracle Arena on Friday night and the two teams couldn’t even make it to halftime without getting into it. Bradley Beal and Draymond Green got into the physical play early on into the game, and they both ended up losing it on each other before the half expired.

With time winding down in the second quarter, Beal and Green found themselves tangled up near the basket. Rather than going on with the game, Beal decided it would be a smart idea to smoke Green in the face as he turned to head up the court.

As you can probably guess, Green did not back down after getting smoked by the Wizards shooting guard and took matters into his own hands. That’s when all chaos broke out and both benches ended up clearing.

Things got heated between the Golden State #Warriors and Washington #Wizards after Draymond Green and Bradley Beal went after each other on the court. . Via @bleacherreport

The two players went at it all night long and they didn’t even make it to halftime before they started throwing shots at each other. While both players walked away without any injuries, Green’s jersey got the worse of it all.

Green spoke with ESPN’s Chris B. Haynes shortly after he was ejected and here’s what he has to say.

An irate Draymond Green to ESPN regarding the altercation with Bradley Beal. pic.twitter.com/suxTIyRz1M

Since both players received a technical foul for their play earlier on in the night, this altercation marked the end of their nights as they were both ejected from the game, as expected.

While Beal was heading to the Wizards’ room, a Warriors fan decided to share his two cents with the former first round pick and all Beal could do was smile back while the security guards did the rest of the work.

It's unknown if either player will receive a suspension for the altercation, but there might be some other guys who were in the scrum who might have a fine or two coming their way as well. One person who might be ok, despite throwing a punch, is Wizards forward Kelly Oubre, who only managed to connect with one of his own teammates during the scuffle.