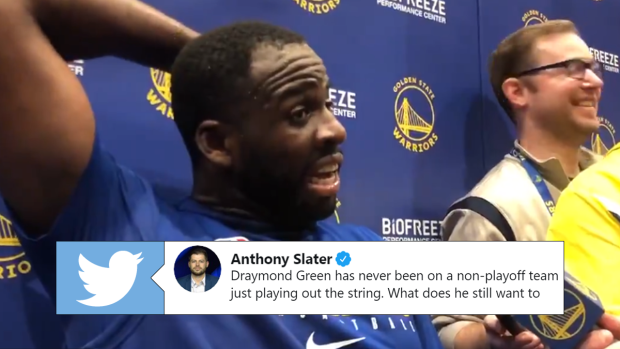 In Draymond Green’s 8-year career, he hasn’t experienced the feeling of missing playoffs once. While that is certainly a testament to Green’s contributions – as he’s been a starter for most of those years – he’s also debatably had the most help out of anyone over an 8-year stretch, ever.

Green was a part of one of the most dominant teams all time, and for five straight years the Golden State Warriors didn’t just make playoffs, they made the NBA Finals. During that time, Green also started to fill up the trophy case, winning three rings alongside Steph Curry, Kevin Durant, Klay Thompson, and more.

Now, Curry is injured. Durant is injured, and on the Brooklyn Nets. Thompson is also on the shelf, and Green is really the last remaining scrap of what was one of the most feared teams as recently as last year.

The Warriors are dead last in the league, and certainly not in any position to make playoffs. When asked about the situation, Green made a… bizarre joke.

Green hasn't missed the playoffs in his 8-year career.

He kind of laughed it off, but there was a weird feeling after he laid that one out. It’s an odd joke to make when you’re supposed to be the leader of the team.

Draymond when they try trading him next year: pic.twitter.com/FowFe2WCCv

Draymond today vs Draymond in 3 months when the warriors trade him. pic.twitter.com/s7r9AJjYze