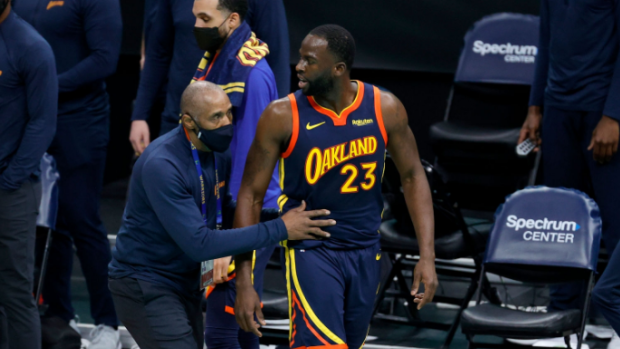 One of Draymond Green’s most distinguishable qualities on the basketball court is his undeniable passion. While his game itself has evolved over the years, you’d be hard pressed to find someone that gets more emotionally invested in the game than Green.

While this is usually a good quality, sometimes there is such thing as letting emotions get the best of you.

This was definitely the case in the closing seconds of Saturday’s game between the Golden State Warriors and the Charlotte Hornets. With nearly no time on the clock, Green believed he had retained enough possession to create another jump ball situation, but the officials ruled that the Hornets had called a timeout during Gordon Hayward’s brief ball possession.

It didn’t sit well with Green, and he let the officials hear about it. Unfortunately for the Warriors, Draymond ended up receiving a double technical, allowing the Hornets to tie it and maintain possession. One Terry Rozier made field goal later and the Warriors were in the L column.

Draymond Green was ejected with nine seconds left and a two-point Warriors lead.

On Monday, Green owned up to the ejection. Speaking with the media, Green took full responsibility for his actions, and claimed that the whole situation bothered him more than being suspended for Game 5 of the 2016 NBA Finals.

“I was dead-ass wrong. … That whole situation bothered me more than being suspended from Game 5 of the NBA Finals in 2016.”

Dray reflects on his ejection vs. the Hornets on Saturday

It's clear that Green isn’t taking his mistake lightly, but whether he’s able to keep his emotions in check down the line may be another story. Green has been in the Top 6 in technical fouls called every year since 2014, leading the NBA for two of those seasons.

He currently has 8 Ts on the year, tying him for 2nd with Dwight Howard. Only Russell Westbrook has more with 9.