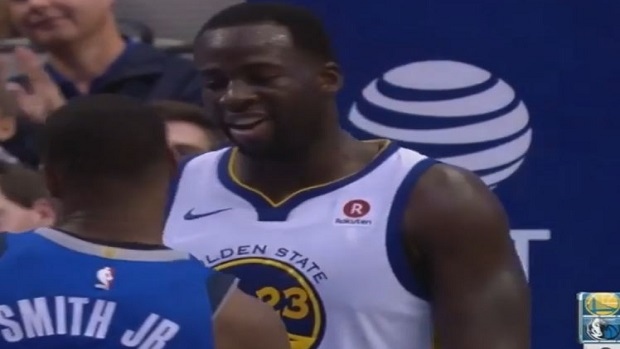 Draymond Green is one of the best in the business when it comes to playing defence.

The 27-year-old forward has been named to the NBA All-Defensive First Team the past three seasons and is the reigning NBA Defensive Player of the Year and he put his power on display on Monday night against the Dallas Mavericks.

Late in the third quarter, Mavs rookie Dennis Smith Jr. went hard to the rim and attempted to score over Green, but the two-time NBA champion wasn’t having any of it and gave the youngster a message right after he missed the shot.

“You’ll never dunk on me, you’re a boy,” is just one of the messages Green delivered to Smith seconds after the two met in the air right beside the rim.

Following the game, a reporter asked Green about the taunting on the court and he wasn’t afraid to hold back from sharing what really happened out there.

As for Smith, he doesn’t exactly consider that getting stuffed at the rim since he went to the free throw line seconds later.

Dennis Smith Jr. on his back & forth with Draymond Green: "I don't know what he was talking about. You can't say nothing if you foul me."

The two teams don't play each other until December, but we can't wait until their next meeting.