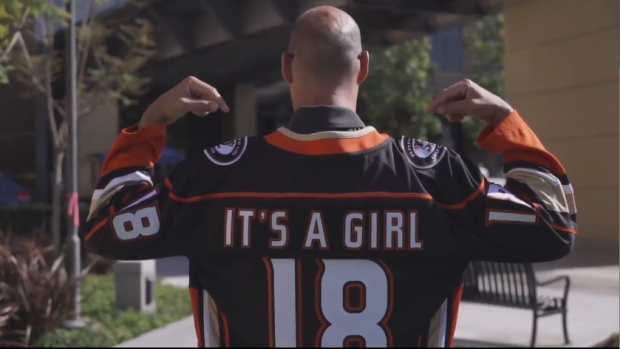 We’ve seen some interesting gender reveals in the world of sports. There’s been a couple blunders, a few creative ones, and just some flat out awesome ones.

With Father’s Day celebrated on Sunday, one Anaheim Ducks fans decided to reach out to her husband's favourite team to surprise him that they were expecting a girl.

Norma Bates linked up with the Ducks in a creative and tear-jerking video to let her husband, Corporal Andrew Bunnell, a U.S. Marine currently stationed in Qatar about the gender of the couple’s first child. An avid Ducks fan, Bunnel got the message that he’s having a daughter from none other than the bald eagle, Ryan Getzlaf.

Marine Corporal Andrew Bunnell, stationed in Qatar. is a huge Ducks fan. He and Norma are having a child - due in October - and she wanted to do something special to reveal the sex to Andrew in time for #FathersDay.

According to an interview with Daniel O’Leary of NHL.com, the couple wanted to have the surprise together, but an unfortunate slip of the tongue by Bates’ doctor spoiled it for her.

So, instead of letting Bunnell know, she decided to something a little different to make the surprise all the more special. Knowing that her husband follows the team closely on social media when he’s deployed. She reached out to the Ducks and told them the doctor story. The team asked who Bunnell’s favourite Duck, and the team was able to put together the video.

Bunnell was notitfied of the clip, and was able to find out firsthand the gender of his soon-to-be daughter.

The best part of it all? The baby is due on October 23rd, which coincides with the time that Bunnel will return from his latest tour.

Well done to the Ducks social media team, who continues to kill it with their awesome videos. And best of luck to Norma and Andrew on the birth of a healthy baby girl!

Hats off to the captain, too, for this veteran move.