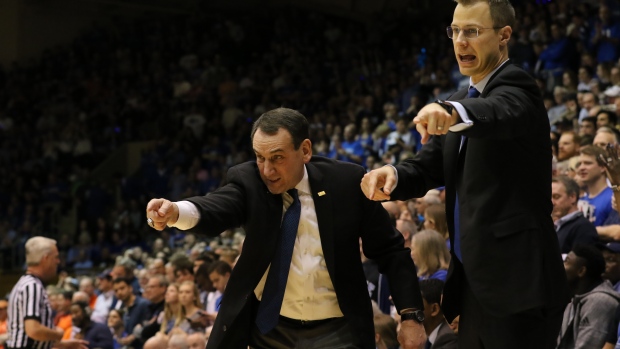 Mike Krzyzewski opened his introductory news conference at Duke in 1980 by spelling his last name for the media in attendance.

"So, I don't want to break any tradition yet," Jon Scheyer joked Friday. "Do I need to spell my last name?"

Scheyer was introduced as the 20th men's basketball coach at Duke University on Friday, two days after the school announced Krzyzewski was going to retire after the 2021-22 college basketball season.

Athletic director Kevin White said that once Krzyzewski made the decision to step down after next season, the school assembled a search committee, chaired by Jon Jackson, the deputy director of athletics for men's basketball and external affairs. The school also hired the search firm Collegiate Sports Associates to aid with the search.

"This is indeed an exciting moment in the history of Duke athletics, and quite frankly, in the history of Duke University," White said. "Jon Scheyer represents, in my opinion and in everyone here's opinion, best in class, relative to the next generation. Simply put, an outstanding contemporary leader within college coaching."

Scheyer, 33, played at Duke from 2006 to 2010, leading the Blue Devils to a national championship in his final season. He earned All-American and first-team All-ACC honors as a senior before playing two years professionally overseas. He returned to Durham in 2013 as a special assistant under Krzyzewski, was promoted to assistant coach in 2014 and associate head coach in 2018.

Over the past few years, Scheyer has expanded his role within the Duke program, playing a key part in securing top-two recruiting classes every single season he has been on staff. He was the lead recruiter for Jayson Tatum and elite incoming recruit Paolo Banchero, among others.

He will now be tasked with replacing Krzyzewski, arguably the greatest basketball coach in the last half-century of the sport. Coach K will end his career as the wins leader in men's Division I college basketball and has led Duke to five national championships, 12 Final Four appearances, 12 ACC regular-season titles and 15 ACC tournament titles.

"It's no secret the amazing success that Coach has had here, and following him is incredible because of the foundation that's been laid," Scheyer said. "I know there's going to be expectations that come with that. I'm going to follow my instincts. I'm secure in who I am.

"Coach K is one of one. He's one of a kind. I would be unsuccessful if I tried to be him. Nobody can be Coach K. With that said, I'm not stupid. If there's something I can go to him and talk to him about, I have the best resource in the history of college basketball that I could ever have. I'm going to go to him. Our relationship stands on its own."

Krzyzewski, 74, didn't speak at Scheyer's introduction on Friday, but he spoke at length about his successor during his retirement announcement Thursday.

"Any of the guys who work for me, they were my former captains. They all had great résumés, and I tell all of them when they come on, 'I only want you here if you want to be a head coach,'" Krzyzewski said Thursday. "What I've learned is to give them all these responsibilities where they didn't have different things -- they do everything. Jon's done everything, and in the last few years, we've taken it up to another level. He's one of the smartest coaches in the country, to be quite frank with you. Nobody knows that as well as I do, and [assistant coaches] Chris [Carrawell] and Nolan [Smith] know it. The players know it.

Duke will enter the season with a team that should be poised to make a deep run in the NCAA tournament. The Blue Devils are ranked No. 13 in ESPN's most recent Way-Too-Early Top 25, led by Banchero, a potential No. 1 pick in the NBA draft.

Krzyzewski will be at the helm for this season, although Scheyer is expected to take the lead on the recruiting trail beginning this summer. In less than a year, the hope is he will be able to hit the ground running.

"I plan on taking advantage of the amazing opportunity that these 10 months present," Scheyer said. "This unique situation, I think the thing that it does is it gives clarity. Clarity is helpful. Sometimes when something is unknown, your mind starts to wonder.

"Now that there's clarity for our team, I think for everyone, we can focus on the task at hand. Which is to win the whole damn thing this year and have the best season we possibly can."